This story will sound awkwardly vain I suppose, but I’ll tell it anyway:

This morning I woke with a friendly and familiar melody in my head. I lay there for sometime letting it play out as I slowly came to full consciousness. Suddenly, it dawned on me that the song I was so enjoying was my own song, called “Oh Love”, that I wrote for my Waiting for Aidan album over a decade ago. But then I realized further that it wasn’t my version of the song I was enjoying, but rather a cover of the song Jacob Moon recorded years later.

My version is upbeat, and ironically, the morning I wrote it, I woke from a dream with it already forming in my head. The text derives from Hebrews 1 and Psalm 8 and asks of God the rhetorical question, “How can it be true that you are mindful of us?”  The text tells of human folly reminiscent of the prophet Jeremiah’s charge to his people who had “forgotten how to blush.”

And yet—and let’s not forget that God’s salvation hangs on words like “yet” and “however”—here is where the music is justifiably upbeat… the psalmist is glad-fully and astonishingly convinced that God inclines affectionately towards us in any case.

Jacob’s version is slower… more melancholy. It’s really beautiful actually, and I think it is the better version. There’s a lovely sorrow to Jacob’s version that is more truth-bearing, because I think that great beauty almost always has a subtext of sorrow. Great beauty knows that behind God’s gladsome salvation which promises creation’s liberty, there is the heaviness of sacrifice borne by the One who absorbs our folly so that we may flourish. Beauty knows, in the end, that Love is terribly costly.

Interestingly, only a few weeks after the song was written, the World Trade towers came down in Manhattan. I remember sitting on the edge of my bed in a hotel room, watching in horror as the drama unfolded in real time. Weeks later, seeing pictures of the smouldering ruins and those who bravely risked their lives to rescue all who could be rescued, the lyrics spoke again: 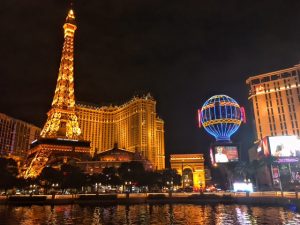 Recently, my manager Dave and I had a layover in Las Vegas. We were traveling with a colleague to California for some meetings there and decided to take the opportunity to stay over night in Las Vegas so we could take in a Cirque du Soleil show. Needless to say, I found Las Vegas to be somewhat distressing. On the Strip—which boasts 1500 miles of neon lights, masking the dimly lit, low ceiling’ed inner chambers housing over 200,000 slot machines—one experiences a cacophonous riot of colours and shapes from the massive facades that only gaudily resemble elegant structures from elsewhere in the world. Music blasts from every storefront so there is not a moment’s respite for the ears. There is not a blade of grass or a park or a bench to sit on. The whole experience is designed to inhibit reflection and keep the senses maniacally stimulated. The following morning it was impossible to find a quiet coffee shop to sit in a sunbeam and read a book. However, on the edge of the strip, rising trim and precise in comparison to the sensory glut of the surroundings arose the sleek and monochromatic Trump Tower. It happened to be the day of the President’s inauguration and so the tower seemed more ominous to me than it otherwise might have been. Jeremiah comes to mind again: ” …they have grown sleek and fat.” (5:28) 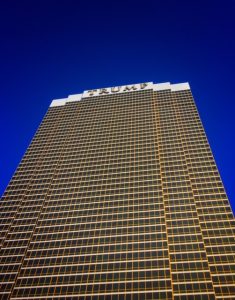 It would be no surprise to anyone who knows me how distraught I have been at this President’s endorsement by a large section of the Christian church. I fear the church’s irrelevancy if she continues to choose to betray her roots in favour of a politics that seems, almost at every twitter-step, to counter the teachings of Christ. I fear the the church might simply devolve into another competing “ism” with nothing much to offer other than  distraction temporarily keeping our inconsequentiality at bay. Many will, of course, object to these words. Fair enough…these are complicated times. And I would hope no one would read this as a ringing endorsement of the alternatives.

But the song still sings. The words still ring across the centuries. Human folly is what it is, and does what it does, but in no way that outpaces the goodness of God. Not according to the witness of scripture anyway, and not according to my own instincts which continue to swell with hope and song.

I am so grateful for Jacob’s version. It moves me deeply and reanimates the song in a way I wouldn’t have imagined.

Covering someone else’s song can be a very creative and rewarding endeavor. Years ago, I recorded a whole album of my favourite Bruce Cockburn songs on a CD called, My Dinner With Bruce. Half-way through recording the album I had the opportunity to visit briefly with Bruce who knew I was working on the project. After asking me how I thought it was going, he leaned forward and said, “please bring something new to the table.”  I thought it such a gracious thing to say. He knew there was more to be mined and hoped I might do some of that lifting. Art is “evergreen” that way. And let’s not forget either, that scripture itself is artful speech, and still has much newness to offer.

Here’s Jacob’s version of “Oh Love.” I’ve included my own version afterward for those who might be intrigued about the process of how these sorts of things come about. It’s kind-of delightful really…

A live version of Jacob performing this song is available HERE…

You master, started it all
Laid the foundation
Fashioned the stars
But the earth and the skies
Will one day wear out
Like a worn-out old coat
But not you, you stay the same
Never fade and never change

It’s true, faster and faster we fall
In a sickening spin
We’re tumbling carelessly
And voluntarily making it all
Appear like the dream of our choosing faculty
We’re so proud to be so free

Oh Love, what are you thinking of?
How could it be true that you are mindful of us?
All day I’ve been thinking this way
Passing the time
Sounding the name
That is echoing over the earth