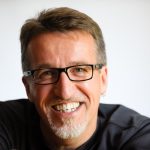 I don’t know how the recent disaster in Pakistan has hit you – but the first response I had on hearing about it was…well,  weariness. I deliberately didn’t pay much attention at first because, frankly, like for so many others, it has been a bit of a tough year.  The changing economy has meant that Signpost Music has had to dramatically downsize, letting go of two valuable employees and putting significant dreams on hold or to rest.

In past years, Nanci and I have been privileged to travel with the Canadian Foodgrains Bank to visit areas of the world where prosperity is more difficult to come by, and we’ve learned some of the complexities of chronic poverty and need.  Yet, as of late it seems that crisis is becoming relentless and one is tempted to insulate against some of the harsher realities of human existence. But I couldn’t, for long anyway, simply ignore the fact that millions are newly cast into misery while I can still afford to go out for the occasional dinner and movie with my beloved wife of 28 years.

Eventually  I went on-line to do some quick  research of the situation.  When disaster first struck, the UN was saying they needed about 426 million as a first response.  Some quick mathematics revealed that if Canadian citizens decided to pick up that bill, it would cost us about $12 each.  That’s 24 bucks for Nance and me to do our share.  So far, so good – we can certainly spare $24. But our son Jesse is a student and has no money. Our other son Micah is a musician and he definitely has no money. We could easily pay their share.  But if we pay their share we might offer to pay our daughter and her family’s as well (they are a young family with young family burdens.)  Also, our elderly friend, Rose,  is barely surviving on her pension so we could help with  her share.  Now we’re up to a hundred bucks or so. No sweat.  And when I consider that there really are whole families in Canada who honestly can’t come up with excess resources, given the incredible  benefit we have received by virtue of  geography, ethnicity and good luck, why wouldn’t we double the amount and pick up another family’s share? 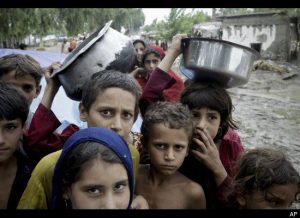 So I took $200 to the office at Canadian Foodgrains Bank and asked them to put it toward relief in Pakistan.  It seemed like such a paltry sum, and I was tempted to explain to the receptionist that I was really covering much more than my  share, but that somehow seemed pathetic.  Yet the fact remains that it really wasn’t a lot of money, it certainly didn’t hurt me to make the donation –  if we all simply did a little something, a lot could be done.*

I’ve just finished reading Rodney Stark’s The Rise of Christianity. Starks is a sociologist who started researching the question Why did Christianity get the traction it did in the first century? What was it about Christianity that not only set it apart, but that sustained growth enough to become the engine behind a radical ethical shift in the direction of western civilization?  His conclusion is that the phrase “For God so loved the world…” changed everything. In a pagan society where the gods were capricious, self -aggrandizing, manipulative and manipulatable, the concept of a God of unassailable character, who loves the world, would have been almost incomprehensible.  But that Christianity understood God as such, and also understood that it was impossible to please God without loving what God loves,  caused a social revolution and eventually undermined an empire that kept millions of lives in abject misery for the benefit of a few hundred elite families.

Perhaps, given the acceleration of environmental and human tragedy that seems to be upon us, this is a good time for Christians to reflect on the qualities that won them their favour in the first place:  Who is God? Who and what does God love? What does it look like for us to image the one whose self-donation won us freedom from our own destructive impulses; whose empathy for our miseries is unquenchable?

When I stop long enough to reflect on these questions, I find that gratitude swells in my soul, weariness recedes and energetic empathy re-emerges. 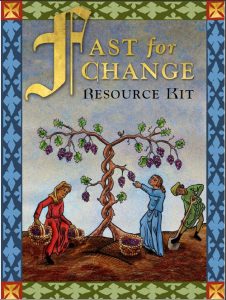 While at the Canadian Foodgrains Bank office I learned of the 2010 Fast For Change campaign. It is a campaign they have implemented as a way of prayerfully approaching World Food Day on October 16th. They have prepared some helpful materials for personal or group use  including a beautiful 7-day Fast Booklet Guide that you can order for free  for you or your small group or church.

I find that deliberate attention spent on such things goes a long way to generate new energy for simple acts of kindness and solidarity with all that God loves. Check out: www.fastforchange.ca .  If you are interested you can view the films I’ve worked on with them and the song I wrote with Glen Soderholm after returning from Ethiopia ( see video.) The various videos can be accessed by clicking on the Multi-Media button on the top bar.

Catastrophes can be times of great suffering and isolation for many. But they can also be  occasions to re-member and recall our common humanity created in the image of the unity of God.

* There is a lot of debate as to the efficacy of aid. I’m happy our government has agreed to match personal donation dollars but am somewhat underwhelmed  with the effects of government-to-government aid programs. That’s why we tend to give to organizations like the Canadian Foodgrains Bank whose  partnership with small local initiatives on the ground can be assessed and adjusted by indigenous wisdom and available resources to meet  changing needs.

9 thoughts on “Compassion Fatigue? Me too.”