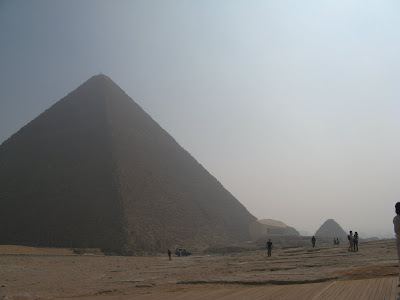 Great Pyramid at Giza
Woke up this morning at 7am and by 8 had eaten breakfast, met our guide Magda, and were crossing the city to Giza to visit the three most famous of the 118 known pyramids in Egypt.

First, let me correct last night’s description of Cairo. It is perhaps a bit more cacophonous and unruly than I had perceived in the dark the previous night. The population density is staggering. Most folks live in a sea of largely unfinnished appartment blocks (owners pay less taxes on an unfinnished structure) which gives the city a… well…. unfinished look. There is a lot of road construction to try to keep up with the rapidly increasing population.

Egypt, though only one tenth the size of Canada has more than 80 million people, compared to Canada’s 33 million. But here’s the rub – Egypt is 95% uninhabitable desert. All these folks live in the remaining 5% of land and the population is increasing by 1 million every 9 months.

Anyway, the Giza Pyramids are right along the edge of the city that stops abruptly on the desert’s edge. 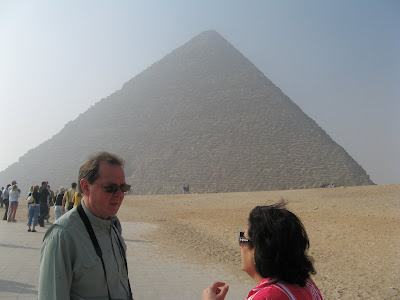 Rikk and Magda in front of the Great Pyramid / 2700 BC 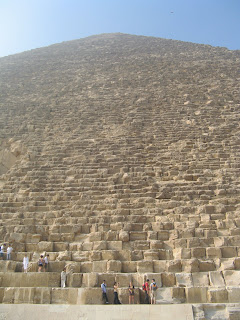 On first glance the pyramids don’t seem as large as you might think but as you approach the enormity becomes apparent. This one is 480 feet and is made of 2,300,000 blocks of stone ranging in weight from 2-15 tons.

view from base looking up

From obeserving the death of the sun each evening, and its rebirth each morning, the ancient Egyptians deduced that there was an afterlife. But they assumed that the afterlife was a rebirth back into the physical world. So, those who were rich andpowerful enough to do so were entombed with all their stuff so they’d have it when they came back. 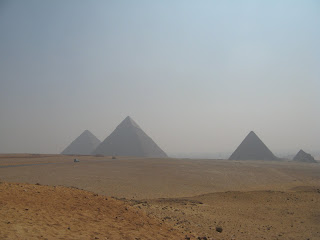 The three Giza pyramids entomb a father, son and grandson; Kings from the 4th dynasty. The largest of the three remains the only surviving structure from the ancient 7 wonders of the world.

Rick and I went into the pyramid in the forground of the above shot. You enter by crouching into a small shaft (maybe 3 feet square) and descend 70 feet down and then 70 feet back up to the center of the pyramid were the burial chamber is. The chamber is empty but for a single open sarcophegus. The contents of the chamber have long since been emptied by tomb robbers. 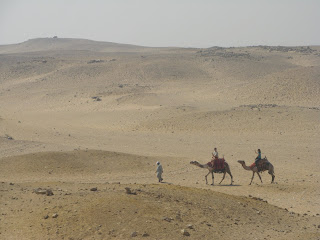 If you turn 180 degrees from where I took the above picture you see nothing but desert. This is the mighty Sahara which extends from this spot for 4000 kms to the Atlantic ocean. I found this to be more stunning than the pyramids .

Standing on guard at the entrance of the whole area is the Sphinx; body of a lion, head of a king – presumably King Khufu who’s tomb is directly behind. 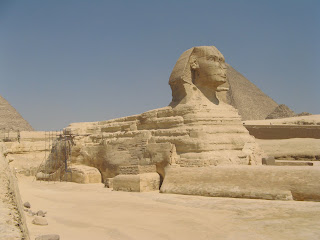 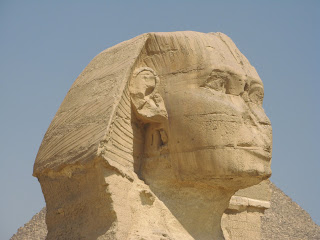 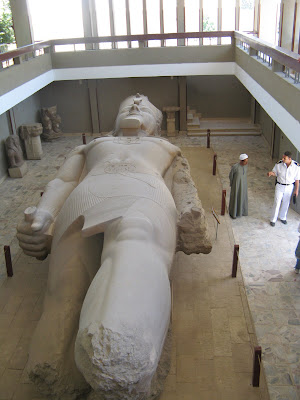 We left the Giza pyramids and traveled 2okms south of Cairo to Memphis which is the first capitol of the Ancient Kingdom. The roadway followed a canal taken from the Nile that gives surprisingly verdent life to the fertile ground. Farming here is done much the same way it has been for thousands of years.

There’s not much left at Memphis but a small compound with a large statue of Ramses ll and some smaller relics and statues. Ramses ll was the most powerful of all the Pharohs. 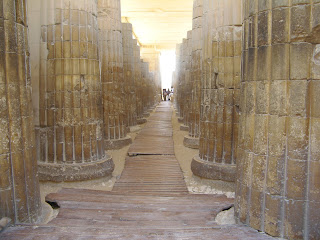 Nearby is the step pyramid of King Zostr (1st King of the 3rd Dynasty). This was wonderful to see. You entered through the remains of this collonade to a large courtyard in front of the Pyramid (below). 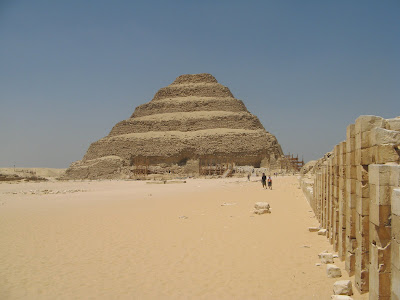 We also visited the Tomb of Maryruka and King Titi (6th Dynasty 20430 BC.) Rikk and I descended into this one as well. I somehow forgot to take pictures of the outside which has not been restored so didn’t look like much more than a rocky hill. But here are pictures of the entrance shaft and burial chamber. 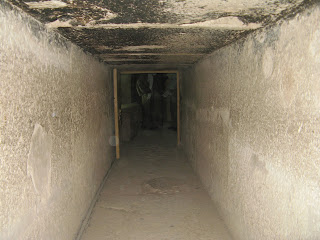 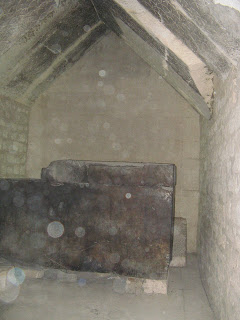 From here we travelled to Old Cairo where we visited a Coptic Church (Egyptian Orthodox) built over a site where the Holy Family stayed for several months on their flight to Egypt. (we weren’t allowed to take pictures. ) We also visited a famous Synagogue (no pictures) before returning to our hotel.

Tomorrow we get up at 6am to catch a flight to Luxor to see, among other things, the Valley of the Kings.

I’ve left out so much of the day – but these were some highlights anyway. Equally wonderful were the conversations with our guide Magda who was so wonderfully informative.

In closing, I wanted to show you how abruptly the desert starts. The picture doesn’t really show the drama of it – it’s quite amazing – there is an actual line where the green is no more and ocean of sand takes over for thousands of miles. 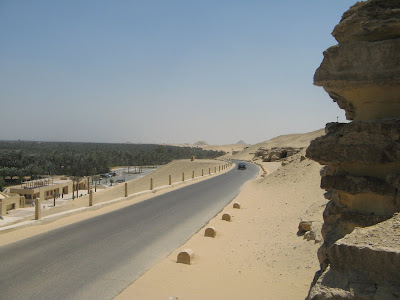 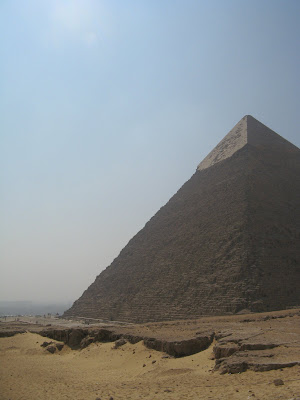 One thought on “Day 2 / Pyramids and Old Cairo”