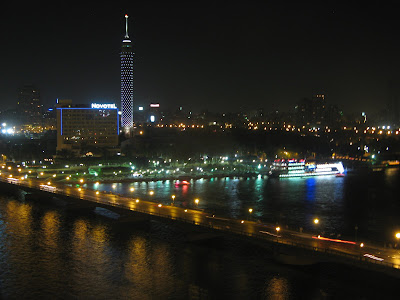 The Nile River – taken from my hotel room.

First impression flying over the Nile delta and toward Cairo is the absolute enormity of the city. It took half an hour to fly over it to get to the airport. There, we were met by a rather striking man, both in features and in demeanor, named Hassan who guided us through customs and to the waiting vehicle to bring us to our hotel.

It was hard to take in much information. Our flight was roughly 24 hours after the delays and missed connections. I didn’t sleep much and somewhere over the Atlantic I was suddenly full-on sick: headache, muscle cramps, hot/sweaty, cold clammy, alarmingly dizzy and nauseous. Ended up retching in the bathroom which was unique in that the plane bathrooms are so tiny you can’t back your butt far enough from the toilet to get your head over it. Unpleasant. I remained weak and headachey for the rest of the flight but seem to be alright now.

However, a bit of info: There are roughly 80 million people in Egypt and 20 million of them live in Cairo. Each day the city swells two or three million with workers coming in from the country. The country is roughly 80% Muslim and 20% Coptic Orthodox Christian. There is also a small Jewish community here. Hussan was eager to tell us that despite media misrepresentation, folks get along here for the most part quite famously and treat each other with great respect. We passed many striking Mosques and Churches.

Cairo (meaning Victorious) was established by the Arab Muslims about 1000 years ago. Before that Egypt was mostly Christian since the coming of St. Mark to Alexandria. Apparently Alexandria is fabulous but we’re not going to get there on this trip. The little I’ve seen of Cairo so far is gorgeous. Very orderly and clean, great road sytems, large squares. But again, I’ll be a better ovserver in the morning.

After washing up, Rikk and I ate a wonderful meal in the buffet restaurant. Could easily be the best buffet I’ve experienced. Nothing wildly exotic – just good. Great humus, salads, skewars, wonderful sausages (I’ll get the name tomorrow – sounds like kafka) with delicate sauces, lots of beautiful tomatoes, cucumbers, stuff I have no idea what it was. All great.

Quite tired now. Tomorrow is aparently a long day – starts at 7. Hope to sleep.

2 thoughts on “Day One / Flight and First Impression / Cairo”