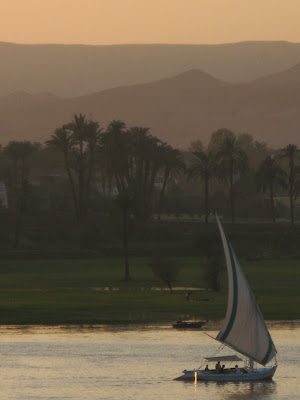 The Nile from my hotel room window in Luxor
I’m going to try to be quick here cause it was a long hot day and I’m up again early in the morning. So I may leave out a detail or two for now and come back and fill in later.

Rikk and I flew out of Cairo early this morning and landed in Luxor by 9am. Luxor is the great city of the Upper Kingdom (southern Egypt – I know it sounds wrong but trust me.) Across the Nile on the west bank is the ancient necropolis which is where we find the Valley of the Kings, Valley of the Queens and the tombs of the Artisans.

As in the northern region, there is only a thin band of lush green farmland that divides like a ribbon the relentless desert and so within a mile or so on either side of the Nile you are into hot, inhospitable landscape. 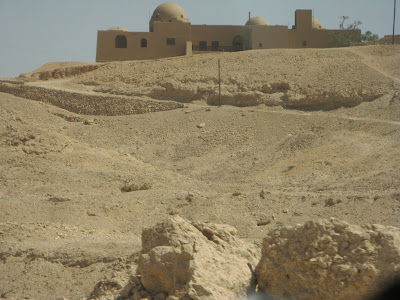 I couldn’t get a vantage point that adequately shows the Valley of the Kings but here is the entrance to the area of ancient tombs. The Egyptians started burying here because the Pyramids turned out to be a big sign informing grave robbers where to dig. Also, here the stone is stable enough for digging and the waters of the flooding Nile were too far away to be a problem. 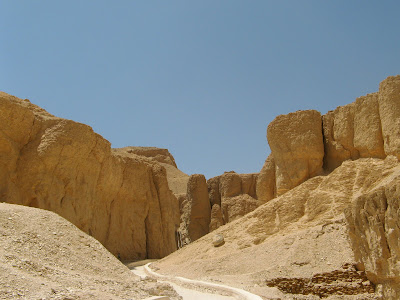 Many Kings, including Tutankhamen were buried here but the boy-king’s tomb is the only one found with its contents intact. Below is is the entrance to one of the tombs. We weren’t allowed to take pictures inside. But maybe, just maybe, one of us tried to sneak a picture anyway and it turned into a bit of an incident 🙂 I mean 🙁

Inside the tombs are completely covered with paintings and hierogliphics. These serve to describe the journey of the King through death and hopefully through to resurrection. 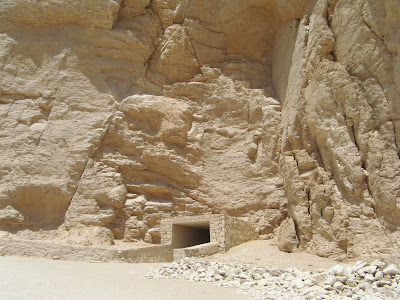 Because of time, we decided to skip the Valley of the Queens and move on to the Artisan’s tombs. On the way we stopped at an shop that made and sold ababaster jars. This man was in front of the shop working with raw alabaster. 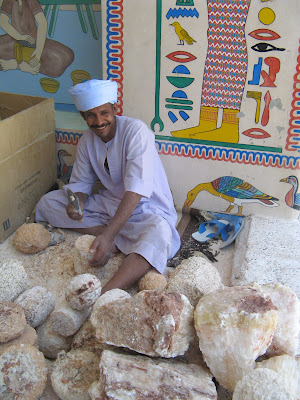 Inside the shop owner explained the proccess and showed us several vases by holding them up to a light that shows off the unique stone colourings and workmanship. 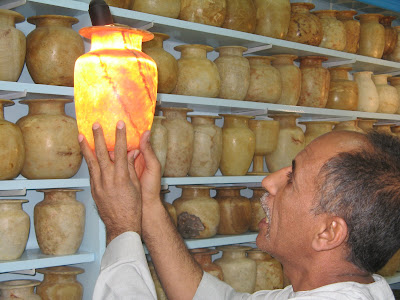 This one below was an inverted bowl with a candle underneath. They turned off all the lights in the shop for us to see. Gorgeous. 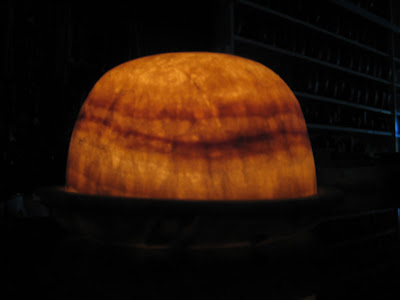 On the way to the artisan’s tombs we passed several villages and hamlets on the mountainside. 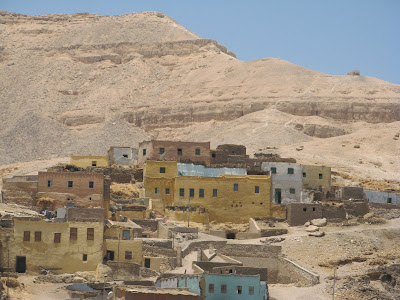 Then – up through the mountains we suddenly came upon this site which is the archeological remains of an ancient artisan’s village. 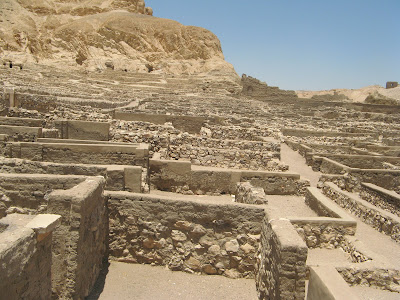 Below is the same site from higher up. It looks fake but that’s what I saw. 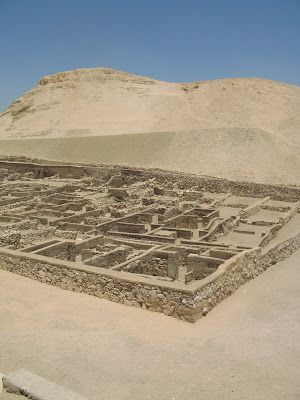 These people would have been in the Pharoh’s service. And these tombs here were almost more interesting than the Kings’.

Because they were mere artisans and not kings – these tombs were built for whole families and so were multi-chambered. One has to make your way significantly down into the earth through steep, narrow carved staircases and into the many chambers of the dead. The walls tell the same stories as the Kings; Gods legitimizing imperial power and the process of passing through death to resurrection. On one of the walls was the most astonishing picture of the Tree of Knowlege, a male and female, and a sepent apparently encouraging them to eat of the tree. Serpents play a big role in the mythology of Ancient Egypt and usually serve to legitimate and protect Imperial power. It could well be that Moses, upon imagining an alternative vision for human community and dignity than what Pharonic logic offered, used many of the Egyptian metaphors but turned them on their heads energizing the new community under Yahweh to a new way of life under God whose rightesouness and justice transends the parochial, self serving and the petty. In the Imperial version – one eats of the tree so that they can become God-like. The serpent is good because it encourages the process. In the Hebrew telling (remember the Hebrews knew first-hand the shadow side of Pharonic logic,) only Yahweh is God and aspirations to be like God are destructive to the person and community. It could be that Genesis was written as a polemic to the Hebrew experience of Egypt, a sort-of counter claim presented directly in the face of the primary claim. I’m over my head here but it sure is interesting to think about. 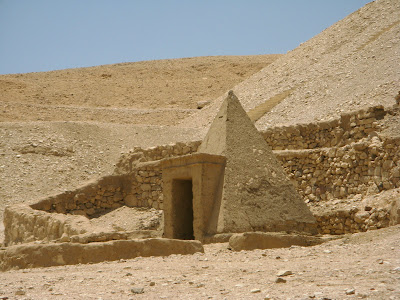 From the Artisan’s village we visited two separate Egyptian temples. The first one, I can’t remember the name. It was enormous and had enormous significance for Rikk who is a histoian. I think by this point the heat was bearing down and I was having a hard time absorbing the details of the pictography and it’s significance. I’ll have to come back to some of that, but in the mean time here are a couple of shots: 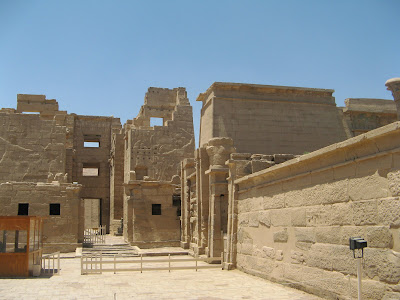 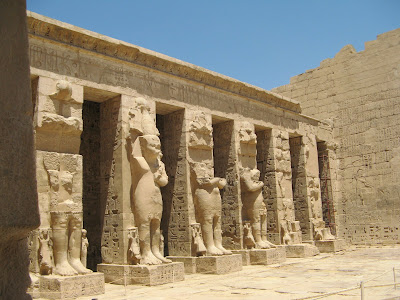 You can’t see it in the picture but every inch of wall space is covered with writing or picture. The whole structure is really a book. 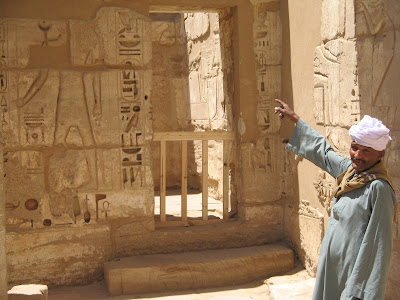 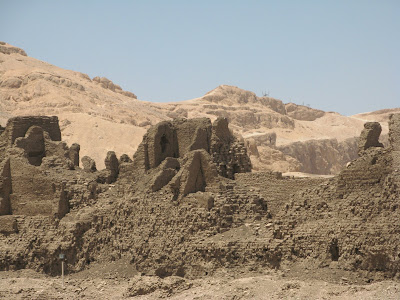 Remains of a priest village surrounding the Temple
It’s late and I’ve got to go to bed. So here are a couple of pictures from the Luxor Temple. The Luxor temple was origionaly an Egyptian temple built by Ramses II (I think) but was later use as a military compound under Roman occupation. Later was used in part as a Coptic Church and now there is a modest Mosque built right in the middle of it. 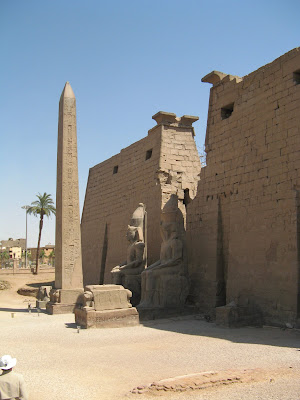 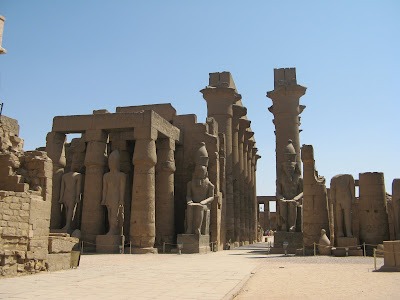 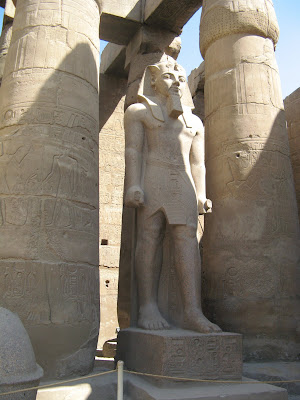 Pharaoh with left foot forward – stepping into battle. His hands would have been holding a parchment in one hand and a scepter in the other. The message: I can read, I have knowledge, I am powerful. 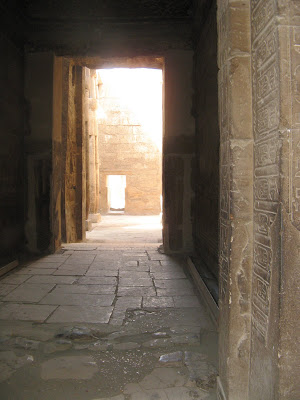 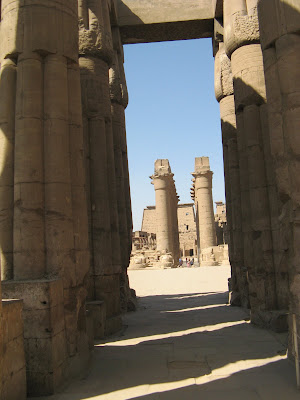 and one last shot of the Nile. 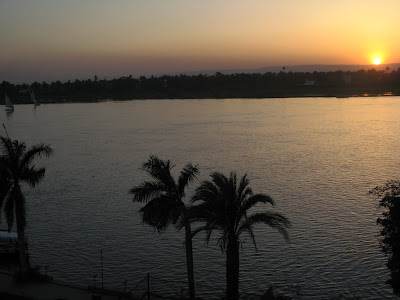