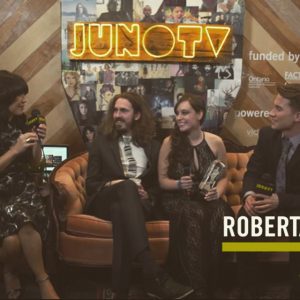 How often do two family members win JUNOs at the same event?

The story doesn’t end there! Roberta is engaged to Dave Landreth, whose band The Bros. Landreth also won a JUNO, theirs for Roots Traditional Album of the Year. The Bros. Landreth and Roberta attended the JUNO event together March 14-15. Neither had prepared acceptance speeches, as with the range of talent at this year’s event they assumed that they would not win.

The backstage interview with surprised winners The Bros. Landreth begins with an excited Dave Landreth, who leaves the interview in support of his beloved, to see who would win the “Packaging Award.” Minutes later applause is heard in the background as Roberta’s name is called as the winner! (see video below) 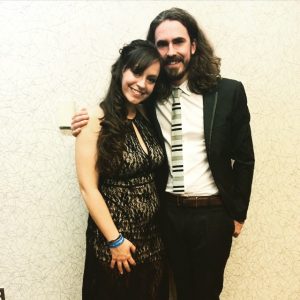 Both winners are integrally connected to Winnipeg’s JUNO winning singer/songwriter Steve Bell. Joey Landreth has appeared on several of Bell’s albums and tours, in addition to both Dave and Joey being mentored by the veteran musician. Having seen Roberta’s work on The Bros. album design (Let It Lie), Bell asked her to design his 4 disc 25th anniversary box-set, and she tackled the monumental project with gusto.

Steve said, “It’s so hard to respond to this and feel like the words are adequate. I wanted a design that felt fresh, but had hooks deep into antiquity. I wanted it to be emblem driven. I wanted it to be a gift to the eyes. I wanted it to suggest a realm beyond words. Whatever misgivings I may have had of you were dispelled at our first meeting. I just knew you understood, and I didn’t fret for a moment after. Thanks… and from the bottom of my heart, I wish you every success.” 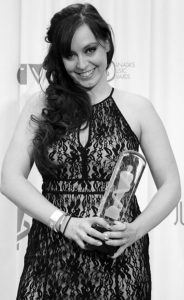 Steve Bell is delighted that his friends have been recognized for their talent at the 2015 JUNO awards. The singer/songwriter/storyteller has picked up two JUNOs in the past, but has never been nominated for the category Recording Package of the Year, which is unique in that it spans all genres.