I thought some of you might want to see photos from the recent symphony concerts. It is pretty hard to articulate how meaningful and fun these events are.  The grandeur and overwhelming beauty is almost wounding. I’m not sure how else to say it.  There is a unique experience and articulation of the transcendent One that I’ve only encountered in this particular situation. My faith and life would be so much more impoverished without it.

I am so grateful for the many sponsors who made these events possible.

I performed four symphony concerts this fall, all in the last two weeks. The first was in Kitchener. On December 5th, Dave Z (manager), Tim Plett (concert producer), Daniel Roy (drums), Gilles Fournier (bass) and Rei Hotoda (conductor) flew in from our various locations and met in Kitchener. We haven’t all seen each other at once since our  symphony concert in Ottawa last spring so it was a joyful reunion that happened to be Rei’s birthday as well.  We had an uproarious time celebrating in a little restaurant across from our hotel.

The next day, Mike Janzen (piano) joined us from Toronto, we met and rehearsed with the Kitchener | Waterloo Symphony and the Cantiamo Singers in the afternoon, and by 7:30 we were joined by 1500 others for the concert itself.

I’ve only worked one other time with a choir –  which you should be able to see in the back of the above picture.  The Cantiamo Singers were mostly young people and were magnificent. It added a whole other dimension to the concert that was quite moving for me. And this, now,  is my public apology for pronouncing their name wrong in the concert. I wrote it on a napkin, which shows some forethought on my part, but I wrote it wrong, which shows…. well… sorry again. I think I said something like Cantanimo, which has a bit of a negative sound association don’t you think?  I am a “bear of little brain.” 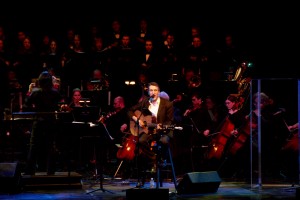 The hall itself was the famous Centre In The Square which is considered one of the top 10 sounding music halls in the world.  It was great to sing in.

After Kitchener, we all went home for a day and then reconvened in Saskatoon to perform three nights there with the Saskatoon Symphony in Lakeview Church.  I was quite surprised at the Church – more like an upscale concert hall with a fantastic PA and a great crew. The SSO was quite a small orchestra but man.. did they ever want to play: probably the friendliest and most energetic we’ve worked with so far. 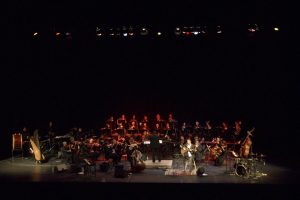 Rei couldn’t make the Saskatoon concerts so we were fortunate to be able to get Regina’s beloved and hilarious Victor Sawa to conduct the Saskatoon concerts.  Unfortunately, we didn’t think to get a good shot of him so this is the best I could find. You can sort-of see him over my right shoulder. 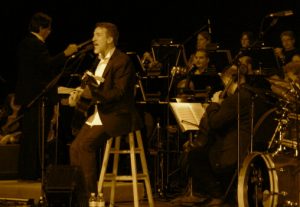 We performed three concerts in a row in Saskatoon.  The second day, I was having lunch with Gilles in Denny’s when an eager couple approached us and introduced themselves. They had just arrived from New York City and happened to be staying in our hotel.  It turns out they’ve been saving for three years to come to a concert of mine and they happen to end up staying in our hotel and we were able to meet and hang out a bit.  I invited them to come back stage after the concert.  Peter had mentioned that his favourite song was Wings of An Eagle, and since that song was not in the concert I sang it for him back stage afterward.

Each night we did the song Peace be Unto You which is fast becoming one of my favourites to sing. It is a lovely Hebrew blessing that Mike arranged for myself and solo violin and viola.  Mike’s arrangement is stunning, and the richness of the solo instruments is such a dramatic change from the extravagance of the full orchestra. I really need to record this for a CD but I doubt the recording will ever match the live experience.

I never tire of talking about the Hebrew word for peace which is Shalom.  Shalom is a huge word that I haven’t begun to fathom; more like a fully-orbed, well-being of the individual-in-community.  I understand that in ancient times folks were more likely to invest themselves in the very words they spoke. And when one wished another Shalom, it was intended as a real passing of peace – the one thing we cannot secure for ourselves, but can pass to another. And I can’t help but be  reminded of Christ’s greeting,”My peace I leave you. My peace I give  you.”

In Israel folks still greet each other with “Shalom.” In Palestine they greet each other with “Salem.”  Same word.  When I was in the Middle East, it always arrested me to hear those words. And I wished we, in the west, had a more noble greeting than the pedestrian “Hello!” So when I researched the word,  I was delighted discover that Hello is a contraction of the old English greeting, “Whole be thou!”  Nice.

I’ll leave you with a few more pictures but, before that, I want to thank so many of you for supporting these concerts, and indeed, the many concerts I do each year.  It is an honour to serve you with the gifts God has given me; gifts I hope glorify the One who imagined music in the first place. And thanks to all the tremendous musicians who invest in this endeavour.