WINNIPEG, MB—On Saturday, September 23, starting at 1 pm, a group of Indigenous peoples and settlers from Winnipeg (Treaty 1 territory) will walk 12 km from Stephen Juba Park to a public gathering at the National Centre for Truth and Reconciliation at the University of Manitoba to urge the Canadian government to fully adopt and implement the UN Declaration on the Rights of Indigenous People.

The Declaration is a landmark document that provides a framework for reconciliation with Indigenous peoples and a guide for legislators, courts, human rights groups, and other institutions. The adoption of the Declaration was one of the calls to action of the Truth and Reconciliation Commission.
In April 2017, NDP MP Romeo Saganash, who spent 23 years at the UN helping negotiate the Declaration, tabled a private member’s bill, Bill C-262. The bill provides a legislative framework for how the Declaration would be implemented and monitored in Canada. The anticipated date for Bill C-262’s second reading is October 18.

Senator Murray Sinclair, environmentalist David Suzuki, Conservative MP Candice Bergen, and singer-songwriter Steve Bell are a few of the thousands of Canadians who have lent their signatures in support of Bill C-262.

“We’re urging our MPs to vote for Bill C-262,” says Leah Gazan, an Indigenous rights advocate who teaches at the University of Winnipeg. “The Liberal government promised to implement all 94 of the TRC’s calls to action and fully adopt the UN Declaration. I’m holding them to their promise.”
While the Canadian government supports the UN Declaration in theory, so far there is no legislative framework for its implementation and review; Bill C-262 provides both.

A key right supported by the UN Declaration is free, prior and informed consent: the right of Indigenous peoples to say “yes” or “no” to initiatives such as resource projects that impact their lands and lives.

“I’m behind this issue not in addition to, or in spite of my Christian faith, but precisely because of it,” says Steve Bell. “The gospel message is inextricably bound to issues of justice. The Scriptures take a dim view of those who possess by dispossession. (1Kings 21)”

In Winnipeg, Bill C-262 has gathered a broad coalition of grassroots supporters from churches, mosques, and community organizations.
Community organizer Michael Redhead Champagne plans to bring a group of Indigenous youth on the walk. “As an Indigenous man, I’m afraid to have children because of how I’ve seen Indigenous families treated here,” says Champagne. “The UN Declaration would guarantee that their rights would be respected.”

After the march, Winnipeggers will convene at 6:30 pm at the National Centre for Truth and Reconciliation. The event will feature stories and performances by Ray ‘Coco’ Stevenson, Ry Moran director of NCTR, Leonard Sumner, Shahina Siddiqui and others. 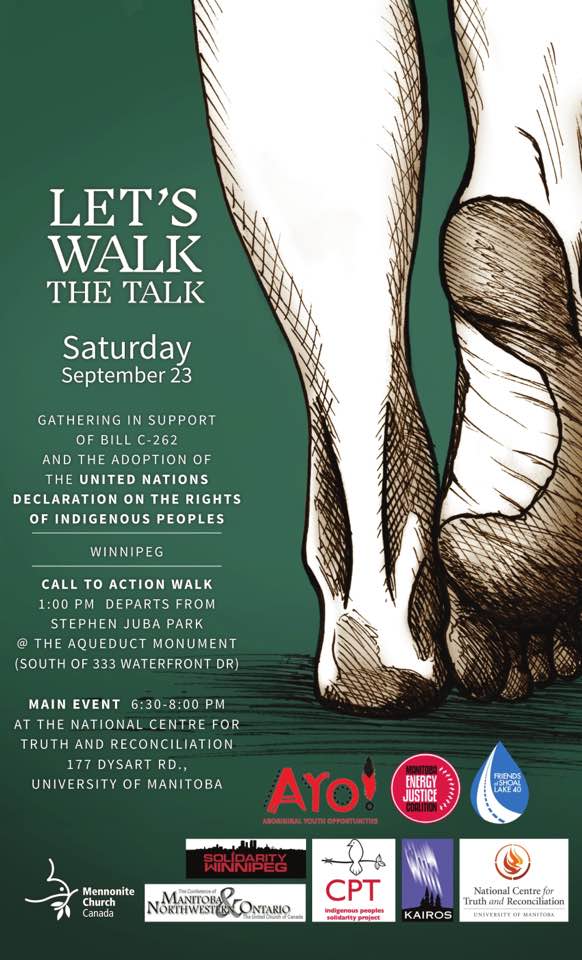