The following is an excerpt from Steve's Epiphany book from the Pilgrim Year book series. 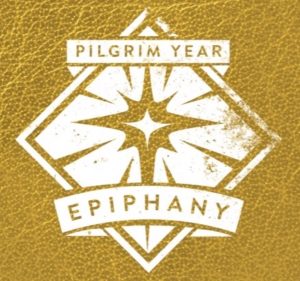 When Jesus had been baptized, just as he came up from the water, suddenly the heavens were opened to him and he saw the Spirit of God descending like a dove and alighting on him. And a voice from heaven said, “This is my Son, the Beloved, with whom I am well pleased.”

If we imagine the sequence of seasons that make up the fullness of the Christmas season – Advent, Christmas, Epiphany – as three provinces of one country, and if we further imagine their various feasts and festivals as the mountains and hills that give the landscape its unique topography, most of us, I think, would naturally assume the Feast of the Nativity (Christmas Day) to be the highest, most majestic mountain in the land. But I’m not so sure. I’m not so sure that Christmas Day isn’t actually a foothill (albeit a magnificent foothill) to an even greater height, which is revealed in the baptism of Jesus. For the baptism of Jesus unveils what it is I think Christ came first and foremost to unveil, that is, the revelation of God’s triune being: Father, Son and Holy Spirit – the divine, dynamic relationality that is at the core of God’s nature:

The mystery of the Most Holy Trinity is the central mystery of Christian faith and life. It is the mystery of God in Himself. It is therefore the source of all the other mysteries of faith, the light that enlightens them. (Catechism of the Catholic Church, 234.)

Significantly for us, it is into this eternal mutuality of other-centred love that Jesus invites us first to see (epiphany!), and then to find ourselves invited and belonging; healed, whole and cherished.

When I was a boy, I secretly suspected that before the creation of the earth and her first inhabitants, God was a lonely monad deity, profoundly isolated in what I imagined to be an intolerable void. So I naturally assumed that we were created to meet a need. Simply put, that God needed a playmate – and what a disappointment we turned out to be! And all that has transpired since has been God’s attempt to salvage an unanticipated and frustrating outcome of his own neediness.

This rather bleak narrative of my juvenile imagination doesn’t produce a healthy sense of self, or of worth, or of one’s place in the world, or, quite frankly, of God. However, the story of Jesus’ baptism offers another narrative to consider, with an entirely different foundational premise, resulting in an entirely different view of the world and our place in it, and with each other.

As the story goes (Matthew 3:13-17; Mark 1:9-11) Jesus walked down to the River Jordan and entered the waters to be baptized by his cousin John. As he emerged from the waters of his own creating, scriptures say the heavens split, the Spirit descended in the form of a dove, and the Father’s voice was heard to say, “That’s my boy! He pleases me to no end!” Or something quite like that.

If you freeze the scene for a moment, and sit before what is unveiled in this dramatic tableau, a world of wonder and possibilities may begin to overwhelm you like the slow swell of a tidal bore. For in this moment, we see for the first time, with remarkable clarity, how God’s “oneness” is not a numerical oneness signifying primordial aloneness, but is instead a relational oneness signifying eternal mutuality and love. According to this narrative, God is not one like a tree is one, but rather like a forest is one, or like a chorus of notes in a song are one, or like a family is one.

Extrapolating from this revelation of God’s self-satiating love, it is quite possible to imagine that perhaps God didn’t create us out of need after all, but rather out of ecstatic overflow… and excess of love… love erupting.

I work primarily as a songwriter. I have often pondered the impulse to create, which I didn’t begin to understand until I began to ponder creation in relation to God’s triune life.

We all have interior landscapes that deeply long to be expressed. I was once moved to tears reading about the Russian novelist Fyodor Dostoyevsky’s late-life longing. As he neared his own death, the great writer was desperately trying to complete The Brothers Karamazov. He is purported to have said that if he could just finish the work, he would die a happy man because he would have expressed himself completely. Feeling the inadequacy of my own artistic efforts, I can relate to what a profound relief it would be to express oneself completely. The feeling would be exquisite and explosive.

It is fundamental to our human nature that when we experience love, loss, wonder, desperation or insight, we want to find ways to express – to incarnate outside ourselves – what is going on within our souls. And so we write, compose, paint, dance, sculpt – all in an attempt to put out there, as it were, what otherwise remains unexpressed inside.

When we begin to appreciate our own need to ex-press, this opens the possibility that perhaps all that we know, see, taste, touch, hear, smell and breathe is the expression of God’s own interior delight and mutuality. What if the love that God has for the Son, and the Son for the Father, simply built to a fever pitch where the divine life just had to create something… to sing something? And what if we, along with all creation, are the song God sang and continues to sing?

The scriptures teach that we’ve been created in the image of God. What does this image look like and how distorted has our imaging become? We can start to understand by looking to this profound epiphany by an otherwise unremarkable river in the backwaters of first century Rome. Here we see the wonder of a personal unity of individuals; and we can therefore begin to comprehend the glory of God as a unity of love. We can then begin to perceive how far away we have strayed from our own glory as image-bearers of the divine and the tragedy of our fallenness. But even in our brokenness we can hear and respond to the gospel news that through Christ, we can ourselves step back into that river, “to die and rise to life and love forever.”

EPIPHANY ON THE JORDAN

Music by Steve Bell
Lyrics by Malcolm Guite and Steve Bell
Appears on the 2012 CD release: Steve Bell / Keening for the Dawn

He calls us too, to step into that river
To die and rise to life and love forever
So graciously extends to me a sinner
To tread the sacred waters of, the mystery of love

What can be said about a mystery
Except to say that the last word can never be said
Never said
Best leave that to poetry
Kindling words for quickening the dead
The living dead
Pure single heart behind all things
Each, to the other, by the Spirit sings

He calls us too, to step into that river
To die and rise to life and love forever
So graciously extends to me a sinner
To tread the sacred waters of, the mystery of love