Looking back before looking forward:

Dave (my manager) and I have arrived yesterday in Santa Barbara for a concert tonight, and a pastor’s retreat that I’m leading tomorrow morning. With these, my work begins for 2019. I’ve have been to this town before, and knew what to expect, but am immediately reminded that winter in Santa Barbara is a wholly different experience than winter in Winnipeg. Sigh… 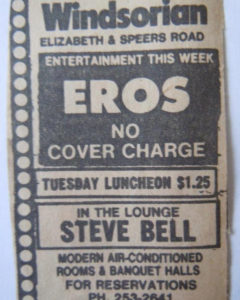 A couple of days ago, while looking through old photos, I came across a newspaper ad from 1979 that documents my first professional gig as a solo artist. It was right around this time of year when I got a panicky call from a local booking agent trying to fill a spot in a Winnipeg lounge as one of her artists was sick and had to cancel at the last minute. She had somehow heard that I could sing and asked if I’d take the gig for a week starting that very evening. With some hesitation, I said yes and immediately phoned a friend (Dave Zeglinski) who was into doing sound and who helped me cobble a PA system together. I then went to a music store and bought a couple songbooks—Greatest Hits of the 50’s, 60’s & 70’s and The Eagles Complete—and desperately started rehearsing songs to sing that evening. That was 40 years ago, almost to the date, and I’ve been performing since.

Exactly a decade later, in 1989, I released my first solo album (Comfort My People) which marked the end of my club days and launched the next 30 years of Christian music ministry which saw the production of 21 CDs, numerous concert DVDs, the Symphony concert series, a solo concert schedule of roughly 100 concerts a year, and advocacy work which has taken me to numerous countries around the world.

Now, 40 years later, with the release of the Pilgrim Year book-series and the launch of my retreats, it seems I’m heading into a new, and perhaps the last phase of my work.

It’s not lost on me that traditional retirement (65 years) is only six years away, and although I assume I’ll work well past that, it is a significant marker to keep in mind as I/we hope to finish faithfully and well. 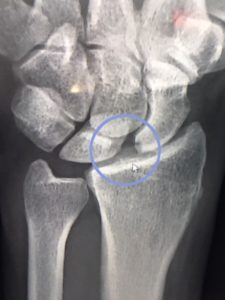 1. The first is that I have an unfortunate wrist injury which may or may not alter the course of my vocation. On the x-ray shown,  you’ll see a blue circle around two bones which have a larger gap between them than the others. I unwittingly severed the ligament between those two bones several years ago while torquing on a wrench (trying to loosen a tight bolt.) Initially, I thought I had only sprained my wrist and so I didn’t bother to have it looked at. I have since experienced low-grade pain which I assumed persisted because I could never rest it on account of my work. Recently, the pain has increased significantly and so I finally had it assessed. It turns out the severed ligament is irreparable, and the gap you see will increase in width as the bone above will eventually sink in between and cause a wrist collapse (SLAC wrist: Scaphoid Lunate Advanced Collapse.) At that time, surgery will be required that removes one of the bones and fuses the rest together. Over Christmas, I saw a specialist considered one of the best in North America who made me a custom splint to wear at nights. He also gave me much good advice about how to prolong the inevitable and manage the pain in the meantime.

Given the age of the injury, he was very surprised I hadn’t experienced the collapse already and suggested that whatever it was that was keeping things together may continue to do so indefinitely. But he really couldn’t say conclusively.  So… I just have to be aware that things could suddenly change, but that is the reality of life in any case. Once an operation is needed, I’ll lose 50% mobility in the wrist and it’s hard to know in advance what that means in terms of my ability to play.

2. The second challenge is financial. Two years ago, my advisory board encouraged me to pursue three things: writing a book, developing my teaching (retreats and conferences) and developing my donor support-base further. I’ve done the first two, and I think I’ve done reasonably well on both accounts. Pilgrim Year is selling remarkably well, getting great reviews, and will likely open up all kinds of opportunities in the future. The retreats are doing very well also. We launched For the Journey retreat last January and have done five since. I am offering four more in the coming months (San Francisco, Abbotsford, Dundas, Ottawa)  with several in the works for next fall. It seems obvious that writing and teaching will become a feature of this next stage of my work in addition to songwriting and concerting.

I haven’t, however, done much about donor development. This is vital to continuing my work especially as monetising music through traditional means has become increasingly difficult. Over the years, CD sales, which have been vital to my work, have dropped alarmingly with no significant pick-up in digital sales (why pay for music when it is either free, or near-free online?) Last year, CD sales were 21% of what they were only four years before and as we look at the trends in music use and buying, it is obvious that within a very short time we will have lost CD sales revenue completely.

So, I have to take a bit of a break from songwriting, producing, book writing etc, and focus the next few months on shoring up finances needed (above concert revenues) to fund the work going forward. What this means practically is that I’ll soon be launching a campaign to find 200 people who will commit to $20+ a month in support of my work. As well, I’ll be looking for a few key-donors who can give larger amounts. Please don’t think that this lines my pockets. The level of output I’ve maintained over the last 30 years (the writing and production of 21 CDs, several DVDs, books and a schedule of 100 concerts per year ) requires an office and support staff.

If I focus this year on shoring up support, I can soon again re-focus on my mission to “refresh Christian faith and spiritual tradition for the weary and the wary” with the confidence that I can do it both well and responsibly.

If you already know that you’d like to be a monthly supporter, you can set that up online HERE…

If you think you might consider significant one-time or yearly support, you can call my assistant Faye at 1-204-774-3715 to set that up.

All donations are tax-receiptable in Canada and the US.

Otherwise, you’ll be hearing from me—via email, snail mail, social media etc.— over the next months. Please bear with me. If you can help… great! And if not…no worries, but I would appreciate if you would keep me in your prayers.

Thanks for taking the time to read this.  I’ll leave you with another photo from early dawn this morning in Santa Barbara.