Journey through the mysteries of the Christian Year with the Pilgrim Year Book series.

Each Monday, we will be posting an excerpt from Pilgrim year, Steve’s seven book series. For more information on the series, or to purchase individual books or the complete box set click here.

This is the introduction from seven books in a series that I have written reflecting on the rich tradition of the Church calendar year. The entire collection includes brief volumes on the seasons of Advent, Christmas, Epiphany, Lent, Holy Week, Easter and Ordinary Time.

Together, these recurring seasons, with their remembrances, fasts and feasts, retell and reharrow the living story of God and God’s good creation – a story that has been entrusted to the Church; a story that often runs as a counter-narrative to stories broadly told in the wider culture. We must not be naive about such things, for stories really do matter. They fashion a rich bed of receptive imagination from which all manner of possibilities are either opened up or closed down. Indeed, if one wants to know the cause of the inspiring and/or bewildering behaviours of any given individual or culture, one need only investigate the foundational stories they tell.

Certainly, stories that tell of a random and meaningless universe will produce a different culture than stories of an enchanted, meaning-drenched cosmos. The radical capitalist story of human relationships necessarily playing out as a blood sport of self-interested individuals in a zero-sum game produces a different result than the story of a supra-abundant universe created in the image of the Triune God whose very being is one of dynamic relationality and mutual, self-donating love. Consider the stories behind popular reality shows such as The Apprentice and Survivor, where there is only one winner and many losers and in which every relationship is eventually sacrificed on the altar of self-interest. Compare them with the gospel stories, which tell of the God of creation emptying himself for the flourishing of all. One begins to grasp that such stories are so much more than pleasing fancies to while away our leisure hours. Some stories enrich and enliven. Some, quite frankly, are dangerous.

The Church tells and retells her sacred stories year after year, much as a mother to her children who ask for the same stories night after night. And like any good child’s tale, they continue to reward well into adulthood. Each time we rehearse and reharrow these stories, we unearth something new precisely because there is so much more to receive, but also because our capacity to receive has deepened.

We Christians are many things, but for sure we are keepers of The Story. We tend it like a fire in the darkest of nights, and we live by its blaze and glory during the day. We should not be scandalized if it sometimes harmonizes with stories from other cultures or faiths, because if indeed the world is “charged with the grandeur of God” which will “flame out like shining from shook foil” (as Gerard Manley Hopkins, one of our finer poets, has said), then we should be rather surprised if it didn’t.

I have pilgrimed through these stories my entire life, and I feel like I am only starting to know them. But to the degree that I have absorbed them as a living tradition, they have fashioned in me a unified mind, body and soul capable of loving God and loving all that God loves.

Let me take a stab at summarizing the tale of which each individual story of the Pilgrim Year is an illuminating piece. This is the best I can do right now, halfway through my 58th year. I hope that in five years it will develop and deepen some… and five years after that… and after that… 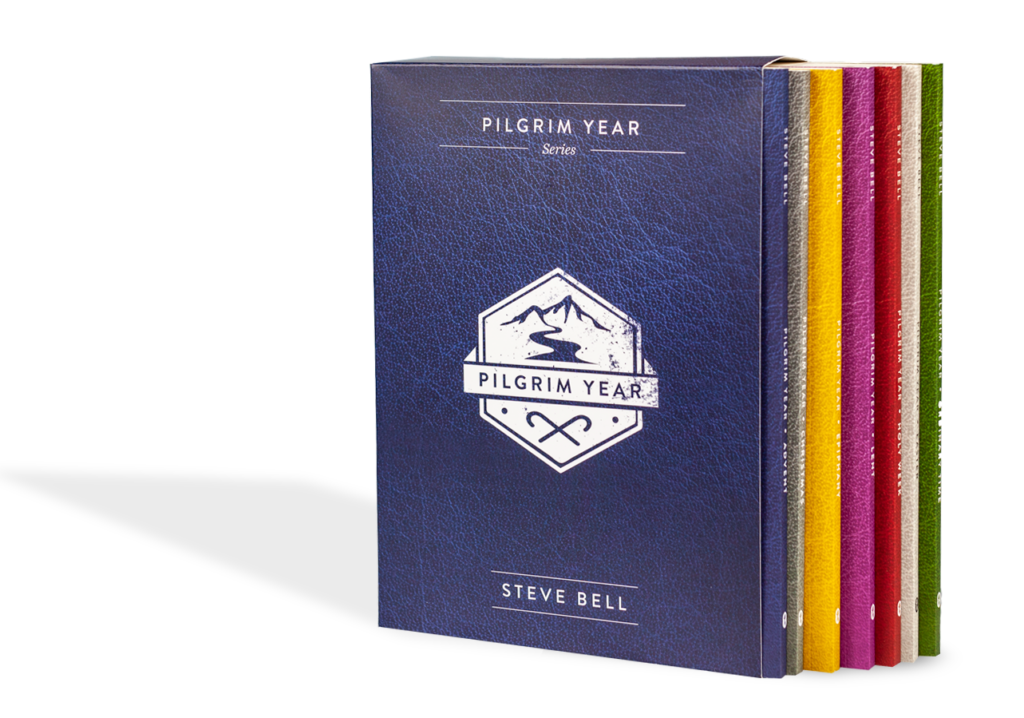 The Pilgrim Year series is an insightful and deeply personal walk through the major seasons of the liturgical year. Everything we’ve come to love about Steve Bell is evident here: his warmth, his stories, and his rich theological insight. What a treasure!”
—Dr. Christine Longhurst Assistant Professor of Worship and Music at Canadian Mennonite University

This is the most winsome newcomers’ intro I’ve seen to the church calendar, just as it is a refreshing breeze for veteran travellers of the Way.
—Brad Jersak Author of A More Christlike God